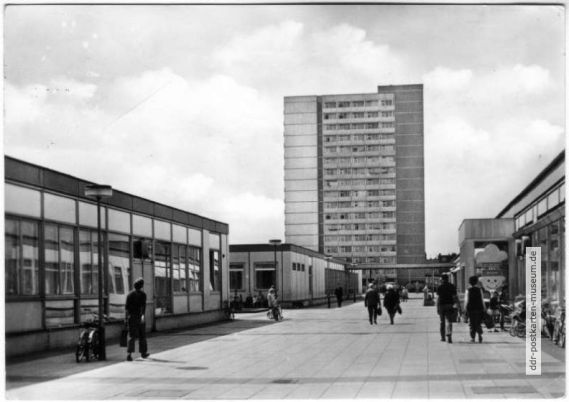 In the hope of finding some then-and-now images of the Hans-Loch-Quarter in Berlin-Lichtenberg’s Friedrichsfelde district and the apartment house at Volkradstrasse 8, where I lived for two months in the fall of 1977, I turn to Google Search for assistance. Happily, Google doesn’t disappoint me! After a couple of clicks I find myself staring at a vintage postcard with a photo of that drab 17-story concrete “slab building” and a portion of the equally barren neighborhood that surrounded it. The somber black-and-white image dated 1967 comes from the collection of the DDR-Postkarten-Museum (GDR Postcard Museum). Eager to see what that neighborhood looks like today, I click a few more times and am able to view the same apartment house which is now called “Haus Friederieke.” Nowdays it stands tall in a park-like setting surrounded by trees and shrubbery. What a difference a color photo and all the greenery make!

I continue clicking on the other postcard images that appeared when I Googled “Hans-Loch-Viertel.” They depict numerous Plattenbau buildings of different sizes; most are flat roofed, multistoried, broader than they are tall, and placed within open spaces a good distance away from the sidewalk. I cannot find buildings that do not have a slab-covered façade, and the virtually non-existent landscaping reinforces the impression of monolithic standardization. One of the postcards depicts a small shopping center with a pedestrian zone that was adjacent to the apartment house located at Volkradstrasse 8, which can been seen in the background. It immediately triggers a memory.

Gazing at this postcard, I can see part of the entrance to the grocery store where my neighbors and I shopped now and then. It was run by Konsum, a cooperative retail chain that operated restaurants, grocery stores, retail outlets, and industrial plants in East Germany after WW II. This nearby grocery store was a convenient place for me to buy items such as bread, butter, yogurt, and preserves for my breakfast (except for coffee), also beer, which—unlike the East German substitute coffee—was really delicious in the GDR. Whenever I went shopping for groceries, I almost always had to wait in line—and often in a long line—before entering the store. The number of customers inside the store at any given point in time was determined by the number of shopping baskets in circulation at that time. Without a shopping basket, one could not enter the store; that was not permitted. The hand-held baskets were similar to the ones available in our super markets for customers who do not need a large shopping cart. When someone finished shopping and exited the store, s/he placed the basket in a bin beside the entrance. The person who was first in line would pick up the basket and then be admitted to the store. As I would eventually learn, the baskets had another very important function, in addition to regulating customer traffic. They also controlled the amount of food or other items any one individual could buy at one time. The store’s shelves were never stocked fully, and some items—e.g., paper goods and especially toilet paper—were always in short supply. Hence, customers were not permitted to purchase a large quantity of any one item, nor could they purchase more items than the basket would hold. The Konsum employees monitored this carefully and enforced the rules strictly. So much for grocery shopping in the GDR!

I resume poring through the vintage postcards with images of the Hans-Loch-Viertel and Friedrichsfelde and come across several black-and-white photos of the Berlin Zoo (Tierpark Berlin). This sprawling landscape zoo is situated on a 400-acre tract of land, just a few hundred meters away from the apartment house I lived in at Volkradstrasse 8. Founded in 1955, it was established originally as a counterpart to the famous but much smaller Berlin Zoological Garden, which was located in what was then West Berlin and soon to be out of reach for residents of East Germany. My memory of the Tierpark in Friedrichsfelde, which I visited only once, is closely linked to what I remember about jogging in East Berlin.

In the 1970s my preferred form of exercise was jogging, and I would take a three-mile run almost every day. While living in the Hans-Loch-Viertel, I tried to go jogging as often as my schedule would permit, usually in the late afternoon. I would put on my jogging outfit and yellow Adidas running shoes, ride the elevator from the sixteenth floor to the lobby, and then jog over to the Berlin Zoo and along its perimeter on the sidewalk. I drew lots of stares inside and outside the apartment house. It was as if my neighbors and the pedestrians I passed by had never seen a jogger—and I think that might actually have been the case. For in the many months I spent in East Germany, I never saw another jogger. Obviously, I stuck out like a sore thumb or, as one reviewer of my memoir Von Oberlin nach Ostberlin (From Oberlin to East Berlin) put it, like a “green dog.” And perhaps some of the people who stared at me back then thought I should be in the Zoo!